In mid-October 2012 a group of 250 Somali refugees protested in front of the Austrian Parliament, some even occupying the space for 2 days. It was followed by a powerful and self-organized protest camp established by refugees and supporters at the end of November 2012 after marching from the asylum camp Traiskirchen to the city center of Vienna. Since autumn 2012, refugees and political supporters are fighting against the abuses of the Austrian asylum policies. For several weeks, they stayed at the Sigmund-Freud-Park in the "Refugee Protest Camp" where they fought for their rights as refugees. After the camp was violently evicted at the end of December, they sought protection and continued their protest from inside the Votive Church. In early March 2013, they moved to the Serviten Monastery where they have continued their fight till now. In the end of July, 8 of the refugee-activists have been violently deported back to Pakistan, while 3 of them have been accused by the state for human trafficking.

Despite the constant oppression that they face, the refugee-activist still continue their fight for human rights! 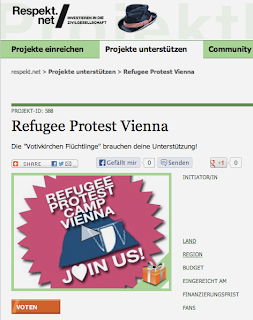 Support the Refugee Movement in Vienna

Contribute to our archive and send us posters and other visual material from refugee movements and anti-racist initiatives to: reemphasiscampaign at gmail dot com